Melbourne Weather: 4 Seasons In One Day

I didn’t do any research about Melbourne weather before I came here. It was one summer day in the early January when I came to Melbourne for the first time. I can still remember, I was sitting on a terrace in the CBD with a nice view on the Yarra River, savouring a gourmet hot-dog with a fresh beer. I had summer clothes and a big smile on my face when suddenly the wind direction changed. The temperature started to drop and we lost almost 10 degrees in less than 2 hours without any reason. I was quite surprised at that time. Now I am used to this kind of weather change.

As you may have already heard: Melbourne's weather is unpredictable –you can find ‘four seasons in one day’! 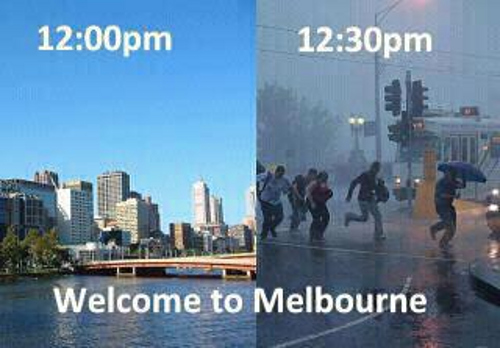 Why would you love Melbourne’s crazy weather? You may ask...

Because it does provide some advantages to have “four seasons in one day”:

What do you need to know about the Melbourne weather?

If despite of what I said you are still concerned by the changing weather in Melbourne, thus the best time to come to Melbourne is probably March/April. I found the weather is most stable at the end of summer or the beginning of autumn.

Click here to have a little bit of help with the Melbourne Weather forecast.

Sun in Australia is very strong and you will need to have sun protection all year around.

Do not under estimate the risk of sunburn and skin cancer. Therefore, do make sure you always have with you a hat and a good sun creme.