I love great eating, that's one of the reasons I love Melbourne because it is really the food city.

You can truly experience its mix of culture in Melbourne's restaurants, cafes, bistros and bars. Come to taste some of the authentic Chinese food in Chinatown, or go to Richmond for Vietnamese, Carlton's 'Little Italy', Fitzroy for Spanish and Brunswick for Lebanese.

I tried a lot of restaurants in Melbourne because I just love eating out. From some high end restaurants for a special occasion to some cheap unknown hidden gems.

The question is, how do I organise the list of my favourite restaurants Melbourne?

I could use the price or the geographic area. But I would like to organise them by theme.

For each theme, you could know which one is the best in my opinion. For example, the best hamburger, the best French restaurant, top fine dining restaurants Melbourne...

After all, when I select a restaurant I ask myself first what do I feel like eating? Once I chose the theme, then I check the price and the address.

But before beginning our culinary journey, I would like to give you some information regarding:

Melbourne Food and Wine Festival is an annual celebration of food and wine. Each year around early March, hundreds of events that fill Melbourne's labyrinthine network of restaurants, laneways, lights-turned-down basements and dizzying rooftops as well as spilling into spectacular regional Victoria.

It is a great time to come to Melbourne, the weather usually is beautiful at this time of the year, it is a fantastic opportunity to experience Melbourne as the food city. Most of Melbourne's restaurants will have some special events for the festival.

What I love particularly is the welcoming atmosphere that goes with the food and wine.

For instance, each year the longest lunch is organised along the banks of the Yarra sometime with more than 1000 seats.

Below an event organised by Trupp Cooking School at Prahran Market during the food and wine festival 2013. 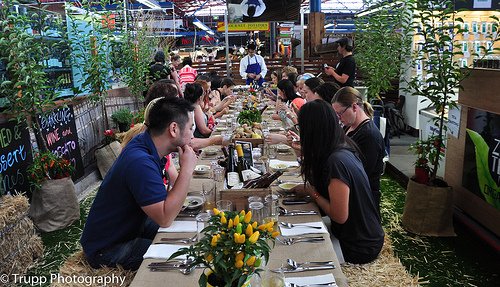 For a long time I have asked myself what could be the Australia's real cuisine or dish.

Because of the multi-culture of Melbourne we have almost the impression that the Italian pizza or pasta could be the national dish or the Pat Thai, or maybe the authentic Malaysian curry laksa. Of course, we should not forget the Sunday roast or BBQ.

The Modern Australian cuisine takes inspiration from countries all around the world. It is the perfect representation of Australian heritage.

You can find the Modern Australian cuisine in plenty of pubs or restaurants in Melbourne.

Some of the fine dinning restaurants Melbourne bring the Modern Australian cuisine to a surprising combination of flavours and techniques.

Personally some of the dishes I tasted in Australia I couldn't find them anywhere else in the world, neither in Europe nor in Asia.

So, each time when I can I will go to discover another of these unique Australian cuisine restaurants in Melbourne.

And of course, Melbourne has a lot of Modern Australian restaurants at all price levels.

Want to know which one is my preferred restaurants Melbourne?

Do you have a favourite pizza, coffee or cupcake place to add to my list of Top Eats in Melbourne? Click here to add it to my Melbourne Restaurant Guide.