Brown snake or Copperhead
What are my experience with Australian Snakes?

Not only tourists, locals in Australia are afraid of snakes as well. And with good enough reason!

You will often hear that Australia has 7 out of the 10 most dangerous snakes in the world, and the list is most likely to be something like:

That's true we share our continent with about 140 species of land snakes, some equipped with venom more toxic than any other snakes in the world.

But in reality few people die from bites in Australia. Maybe 6 per year in contrast to India, for example, where bites may reach one million a year.

There are 2 reasons for this low fatality rate:

Do not get me wrong, I am not saying that Australian snakes are not dangerous. They are! and as soon as you start wandering in the bush you will see some. But if you do not try to touch them or worst catch them, then you should be fine. 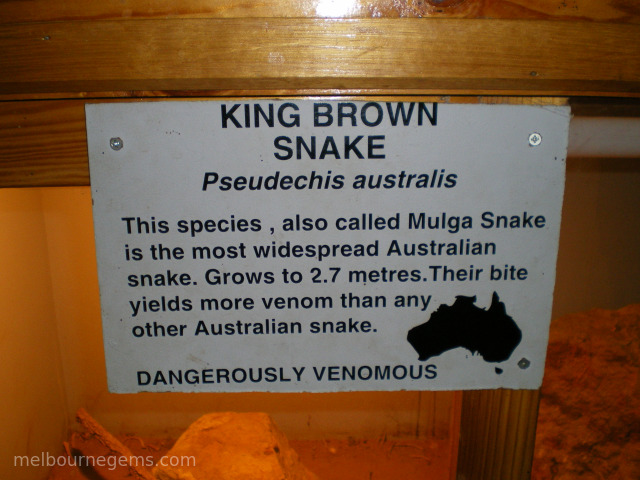 When you read this kind of description, you are pretty happy to have a thick glass between yourself and this King Brown Snake.

Unfortunately (or luckily, up to you) Australia is a wild country where those kind of snakes are largely present. Hence your chance to see one, like a brown snake, is quite high.

What will I do if I see a snake?

I love bush walking. You are likely to see a snake when you go to the bush or the outback in Australia.

What I do when I see a snake?

Stay calm and still. Usually the snake will see you at the same time or well before you see him, so if you do not move he will flee. If the snake does not feel threatened he will not defend himself and pass his way.

Try to take a good picture of the snake. If you do not take a picture, how can you know which snake it was. Many different species are similar in appearance and are extremely difficult to differentiate from one another. I always try a take a good picture and then search on Internet to identify the snake. Also it is not so often to see a snake and you should take a picture for souvenir.

Wear solid shoes when you walk in the bush is also a good idea.

I met once a Yellow Faced Whip snake when I was wearing flip-flop. Believe me even if this snake is not considered dangerous you are not relaxed when it passes so close to your feet.

That said, most of your encounters with snakes will be like this one: quite scary, but nothing to be alarmed of. It is pretty uncommon to bump into a king brown snake, in particular in Melbourne. 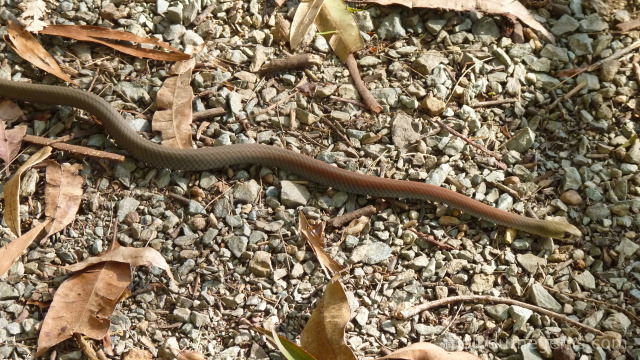 What to do if you see a snake in a place you really do not want to see him? Like your car, your house, etc.

Yes, this kind of situation can happen even in Melbourne.

One of my friend saw a Tiger snake. This snake is amongst the list of the most dangerous snakes and bites are fatal if untreated immediately. Before he had time to leave, the Tiger snake entered into his car!

What he did is what you should do if you encounter a similar situation:

Even if the Tiger snake can be seen in some metropolitan areas of Melbourne it is still quite rare to see one so close to the city. My friend thought it may have been brought by a truck given there was some civil works next to his office.

Below is a photo of a Tiger Snake that I saw when I was walking around the Murray river in Albury. 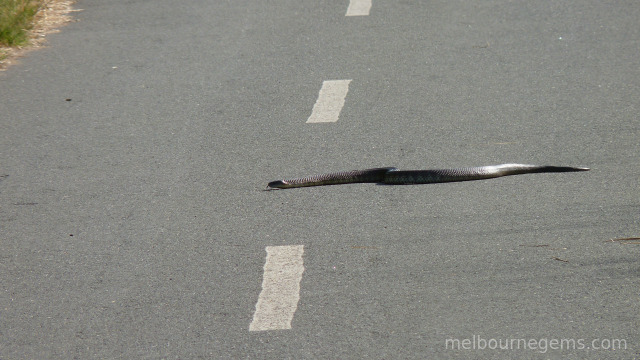 Some spots you may see a snake 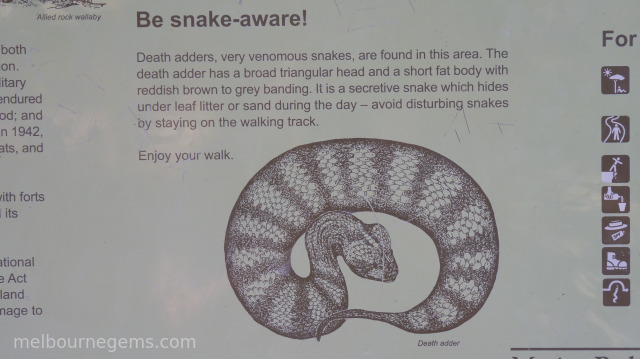 One of the easiest ways to see snakes in Australia is probably by bush-walking. They usually like the long grass and can be seen occasionally crossing the walk path.

You should be fine if you wear solid shoes and you keep an eye on where you put your feet. You can usually use a sign at the beginning of the walk track to warn you about the species of snake that you may see. But it does not mean that you will see one.

Actually, I always feel pretty lucky to see one snake when I do bush-walking. I already saw a brown snake. There was a sign of Death Adder on one of the track in Queensland but I didn’t see any.

You have good chances to see one if you go for a walk in some of the awesome national parks around Melbourne like Wilsons Prom or Grampians. Some walking tracks around the Murray river are also good spots to see a snake.

Philip Island, one island south of Melbourne is well known for its wildlife, is a great place to see the Copperhead snake.
Copperhead snakes are usually shy and prefer to avoid humans, though one day I saw one on a walking track and he was looking at me very confidently. I took some photos quite close to him. He didn’t want to flee at all. 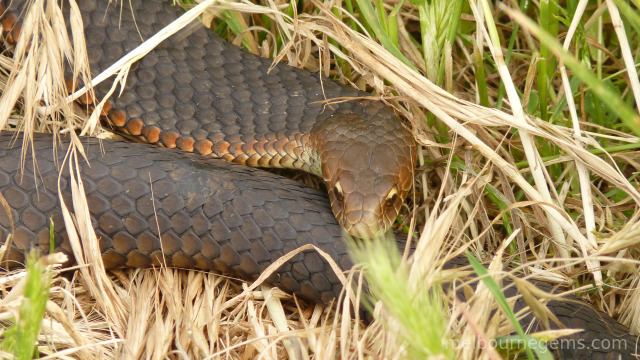 Copperhead is active in weather usually considered too cold for snakes. That’s why you can see them easily in Victoria. A water lover, copperhead snakes are at home around dams, soaks, canals, drainage ditches and along the verges of roads.

Copperhead venom is neurotoxic (damaging nerves), ruptures the blood cells and damages the cells and muscles - but rarely causes fatalities. Copperhead snake is not as dangerous and aggressive than the Brown snake.

All snakes are best left alone. So look with your eyes, take a photo if you can but do not touch them.

This is a true story from one of my travels in Queensland.

I was in a lovely place call Lync Haven in Cape Tribulation.
By the way, if one day you have the opportunity to go to the far north Queensland I would definitively recommend you to stay at this place. The owners Scott and Jodie are very friendly hosts. You can do camping or you can use one of the clean cabins for a very reasonable price.The site is surrounded by rainforest. You can go for a walk and try to find a Cassowary. There is also an on-site café/restaurant serving nice meals. The retreat’s surroundings are alive with the sounds of native rainforest wildlife. Scott and Jodie have their animals as well: birds, lizards and Boris, a salt water crocodile. They thought Boris was a young male crocodile but they have discovered recently that Boris was in fact Doris. Every morning after breakfast you can go to see Scott feed Doris if you want.

Ok, coming back to my story. We were enjoying our diner at their outdoor diner area when suddenly we saw a snake under the veranda.

So, we stayed still but not too far in order to take a good photo of him. Based on the photo we thought that it was a Brown snake. 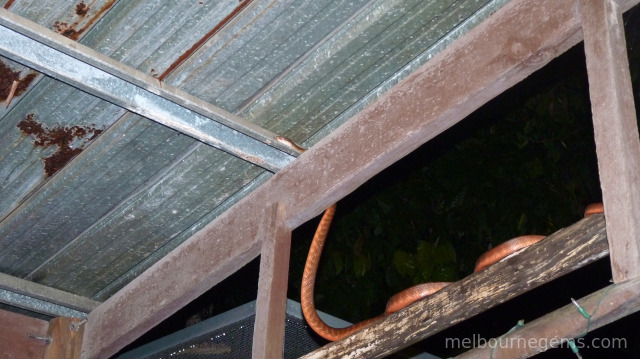 Brown snakes are responsible for more deaths every year in Australia than any other group of snakes. Especially the eastern brown snake which is a very dangerous snake.
Thus we thought maybe we should let the owners know about our discovery.

As soon as Scott heard this news he was concerned that this snake will eat his baby birds.
So he decided to catch him.

He climbed on the bird cage bare foot and with a hook he threw the snake on the floor. Then, he caught the snake’s neck with his hand and allowed the snake to wrap tightly around his arm. Once he had it under control he unwrapped the snake and thrown it outside of his property. 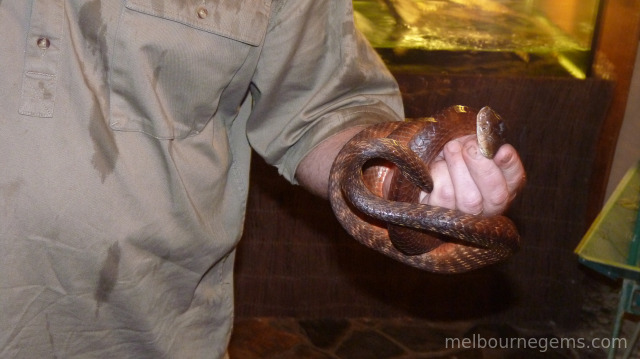 It was a very impressive how he handled this snake. He said it was a brown tree snake instead of brown snake. The brown tree snake is not considered to be too dangerous to adult human. Due to the placement of the fangs, the venom is difficult to convey into a bite on a human, and thus is only delivered in small doses.

However dangerous or not, I would not suggest you to do the same thing than Scott. He is obviously an experienced snake handler.

Don’t forget that he has salt water crocodile as a pet :-)