Echidna and Platypus:
What do they have in common?

Echidna along with the Platypus are the only members of the monotreme family which are Mammals that lay eggs and produces milk for its young. It is pretty rare to see an egg-laying mammal, right?

Also like the Platypus the male Echidna has a spur on its ankle but it is not poisonous.

I will present the Echidna first and the Platypus second.

The first time when I saw this primitive mammal, I found it should live in the same era than Dinosaurs or Mammoths. With its a pointy snout and its body covered of spines, I could totally see it in the "Ice age" movie.

The echidnas are named after a monster in ancient Greek mythology. In Greek mythology, Echidna (Ancient Greek: Ἔχιδνα, "she viper") was half woman half snake, known as the "Mother of All Monsters" because most of the monsters in Greek myth were mothered by her.

The australian animal is nothing like a monster, he is actually very cute. Even now each time when I see one I will take my time and quietly take some nice pictures of this adorable little creature. 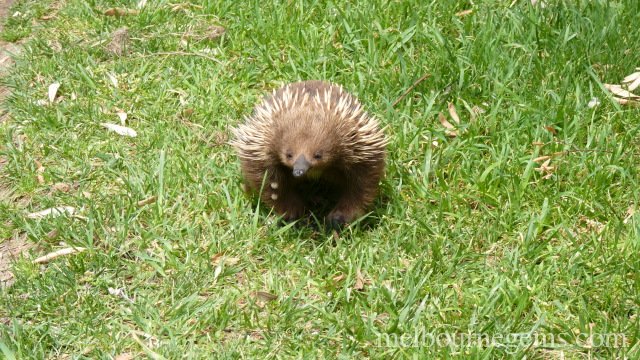 Echidna is a very shy animal. When it feels attacked, the echidna will burrow itself into the ground or curl itself into a ball using its spines as a method of defence against the predator. So, do not make too much noise if you want to observe them.

They are found all over Australia and can survive a range of temperatures and habitats Though mostly nocturnal, in mild weather they can be seen during the day. I usually saw them during the day along a small road or a walking track. 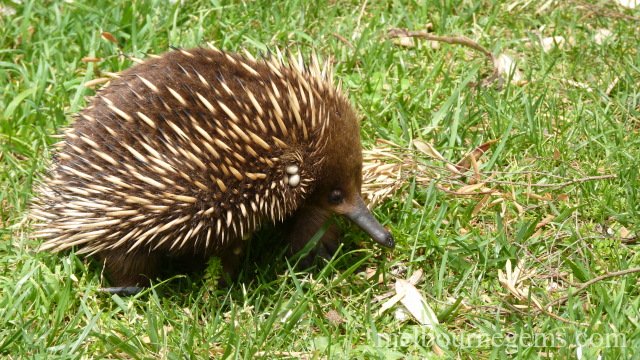 First of all, what is a Platypus? Do not worry if you do not have the response, I would never have thought such animal could exist before I came to Australia. Even some Australians have never seen one in the wild. They're Australia's most comically-featured native species, with dark brown fur, webbed feet, and a rubbery, duck-like bill.

To spot a Platypus in the wild is a bit like the Holy Graal of wildlife watching. It could be hard work and you need to be very patient. Why? Because:

There are not many places you can find a Platypus, they can be found only in eastern Australia, where they live on the edges of rivers and freshwater lakes where burrows can be dug.

During the day, a Platypus often rests in this burrow, they are most active for several hours after dusk and before dawn.

They are also very shy. So the golden rule of wildlife watching applies again: be quiet, do not make too much noise, stay still. 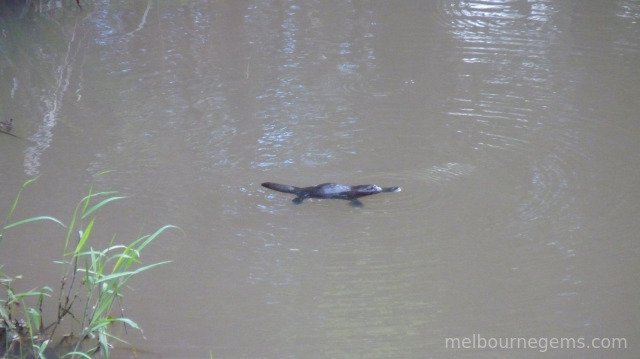 My best spots to see a Platypus:

Unfortunately I have not come across a good place in Victoria to spot the Platypus yet.

I would like to share this small video of Platypus in case you do not have the opportunity to see one. I camped all night in a bush camping next to the Broken River in Queensland's Eungella National Park and woke up very early in the morning to spot my beloved animal.

Video of a Platypus in the wild